As the 2021 NFL Best Ball Regular Season tournaments have concluded, we see once again that all good things must come to an end. Now, it’s time to reflect and focus on the strategy for the upcoming 2022 season. I mean, come on.  What else am I supposed to do? Watch baseball?

One of the main overarching strategies I took on was treating the playoffs like 3 single-slate DFS weeks and trying to build game-stack correlation into your overall builds. The theory was, if one could correctly predict the “blow-up” games in the off-season and correlate teams around those games, the chances of advancing would be much higher over the field.

If you haven’t yet signed up for Underdog Fantasy, you can use Promo Code ‘SPIKE’ to receive a 100% Deposit Match on any deposit up to $100. 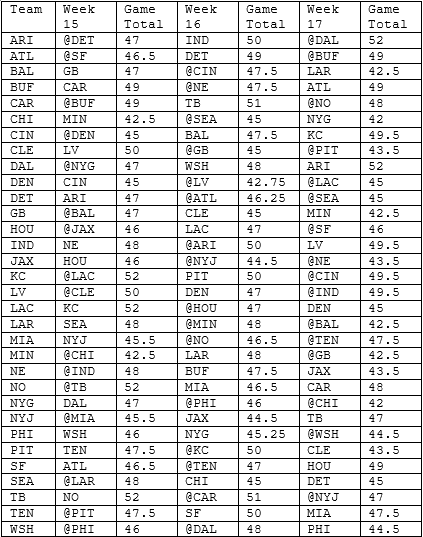 It turns out that projecting and being excited for games in the off-season is in fact #badprocess (this could be a shortsighted, results oriented take). With 2/3 games in week 15 and 2/3 games in week 16 going under 40 points. However, all 4 games in week 17 were over 40 points and two of them went over 47 points. KC-CIN was a shootout and amassed a total of 65 (!!!) points leading us to crown Ja’Marr Chase as the must-own player in 2021.

Unexpected games that popped-off (amassed >50 points) in the Playoffs: 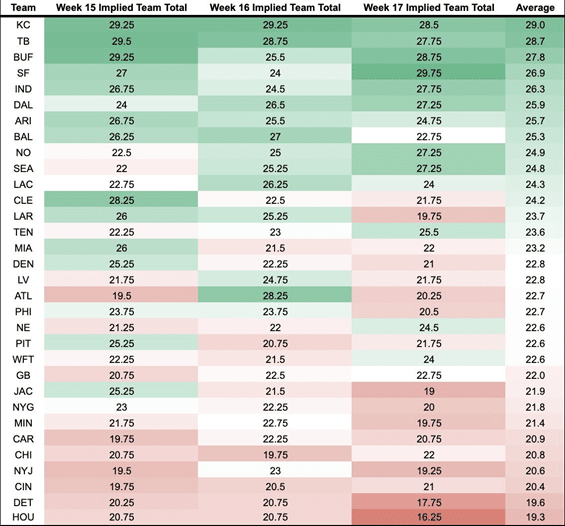 This graphic put together by Jack Miller from Establish the Run, complies implied team totals. Drafters were primarily stacking the Chiefs, Bucs, Bills, Cowboys, Cardinals, and Ravens based on their offensive pedigree.

Based on those main stacks, those teams were a part of a ‘blow-up’ (>50 points) game, 7 times just during the fantasy playoffs (~35% clip). So how did the players from these teams actually fare in terms of advance rate?

What happens when you look at not highly sought-after teams like the Lions, Bengals, and Jets (3 of the 4 lowest implied team totals)? For the Jets, the team had a few viable players during the regular season, Michael Carter (17.42%), Jamison Crowder (18.2%), Elijah Moore (20.33%). Hell, even Zach Wilson (13.89%) had a similar advance rate to Dak Prescott (13.92%). They were a team that lacked firepower. But could they be/ were they a viable opponent or bring-back option? In the playoffs, they attributed to 2 “blow-up” games. Elijah Moore was out. Crowder was mostly out too. Yet we saw their round 3 advancement rates plummet to 9% (Carter), 8.2% (Moore), 9.8% (Zach Wilson), 11.2% (Crowder). All of their final’s ownerships were in the 6-9% range, as well. Which could be attributed to injuries.

The Lions were an interesting team to predict. On one-hand, they were going to be one of the worst teams in football. Yet easily projected for negative game-scripts which is a positive for fantasy football. Players drafted included Jared Goff, D’Andre Swift, Jamaal Williams, Breshad Perriman (thanks Leone), Tyrell Williams (thanks again, Leone), Amon-Ra St. Brown, and Josh Reynolds (Remember the Titans?). The Lions ended up being a very pivotal team for the playoffs, as they were part of the highest scoring game in the playoffs, which happened to take place in week 17 and win people some significant $$. But how did they fare in terms of advance rates? Perriman had a 13.75% advance rate to the playoffs, but he was cut in the preseason, so everything else is essentially irrelevant. Reynolds had a 13.96% advance rate, 21% advance rate to R3 and was on 3% of final rosters (yet was only drafted about 43% of the time). Amon-Ra was in a similar breath with a 17.62% advance rate, 19.5% to R3, yet was owned on 29% of finals rosters (and even the winning team!!). Swift was a huge winner in the 3rd round, advanced 18.55% of teams to the playoffs, 10% to R3 and was on 3% of rosters, but got injured and missed weeks 15 and 16 (which hurt his overall numbers). Jamaal Williams advanced at a 17.28% clip to the playoffs, 11% to R3 and was on 8% of finals rosters, without playing in week 15. Goff was a popular 2nd or 3rd QB option and advanced at a 16.4% rate to the playoffs, a 15.5% rate to R3 and was on 6% of rosters in the finals without even playing in weeks 16 or 17.

Based on overall advance rates, it is fair to say that game stacking in the playoff weeks has very little correlation to actual advance rates. Although it appears that specific games helped propel specific people forward, team stacks individually look to be more the driving force. The KC-CIN and DET-SEA games lead to the eventual champion (Chase, Penny, Amon-Ra). There was additional correlation (Christian Kirk-Amari Cooper) that didn’t actually pan out. There is some correlation that can be seen to game-stacking week 17.

All in all, just play the right plays and embrace the variance YOU will be the BBM3 champion. For now, it is time for baseball… if there magically isn’t a lockout.