With the explosion of Best Ball has come the explosion of a string of draft strategies that many are analyzing, discussing and implementing in their drafts. Even here at Spike Week, I’ve written about many of them (like the most notable structural strategies). And all of these strategies are great, but the majority are things people are implementing at a fairly high rate (or at least somewhat in the case of Zero RB).

And you’ll hear countless people, including myself, talk about the value of “being unique” or “getting different”. That’s absolutely important in a game where we are competing against hundreds of thousands (or nearly a million on DraftKings). The problem is that most of the “unique” ideas are either not as unique as we’d ultimately like, or they are making fairly significant sacrifices in one area or the other (overall projection, upside, advance rate, etc.).

There’s no perfect solution to this type of strategic thought experiment, but something I think we as a fantasy football industry don’t do well enough is adapt our strategies to the current draft environment. Particularly in Best Ball, where the industry has absolutely exploded and completely changed just over the last year, we need to assess this market we are drafting in differently than prior year’s. All of these cookie cutter strategies can work and are very much still applicable, but they aren’t going to be as effective as we’d like unless we are adapting them to the current landscape of the NFL, the player pool for this year, what our opponents are doing, the tournament formats, etc.

Which leads me to one approach that I’ve really started to become high on this summer. It’s a strategy I’m calling the “Undrafted Tight End Strategy”.

Before we dive into the specifics of this strategy, we need to discuss why it might even be a thing from both a real football and a fantasy football perspective.

In today’s NFL, the Tight End position has been changing. The days of every team running pro style offenses with traditional tight ends are gone. We are seeing more spread offenses, as well as more specialist roles for players. That goes for both Tight Ends, Running Backs and Receivers.

If you just happened to remove the Rams, these numbers would be even more drastic.

We see that general NFL player utilization has changed, and that has also impacted the way TEs score fantasy points in the NFL, but what about the 2022 landscape?

The market has (accurately) gotten hip to this idea that the elite TEs create a nice gap at the position. With less TEs producing fantasy relevant scores (or even playing as many snaps), we see those TEs with elite upside (like Kelce, Andrews, Pitts, etc) all going in the top 4-5 rounds of drafts. We can generally spot the TEs with that truly elite upside, and they’re being pretty accurately valued. However, the next several tiers at the position are where things get interesting.

We all have our favorite guys outside of the elite tier, but history tells us that there will only be a few true separators at the position, and those with the ability to do it, particularly on a weekly basis which is so important in Best Ball are not going to be guys that slip to the mid to late rounds. What tends to happen is that the non-elite tier gets priced in a way that is essentially the market valuing their comfort level with them. Take Dalton Schultz for example, he had a nice year last year in Dallas and now has increased target opportunity. I honestly expect Schultz to have a nice season, but we are talking about a player who only earned 6 targets per game last year, and couldn’t even crack 10 points per game in half PPR despite scoring 8 touchdowns. This could certainly end up wrong, but history tells us these are the types of players that can be small wins in fantasy, but are unlikely to be the Mark Andrews of last year.

And thus the problem is that you end up paying a premium for that “comfort”, but comfort isn’t what wins Best Ball tournaments. It’s actually typically the opposite.

Then you get to mid to late rounds where you have a bit of a mixed bag of archetypes, but again, the majority of these players just don’t have the Kelce/Andrews/Pitts type upside in their range of outcomes. That’s not to say they can’t be “hits” in drafts, and many have their place in your draft portfolios, either as part of stacks or as undervalued talents, etc. But as much as I like Noah Fant as a talent, the 3rd option in a run-first Geno Smith led offense is just not going to have a Travis Kelce type ceiling. He’s just not (sorry Noah).

But the interesting thing about the TE position is that there’s also nothing that says there has to be any true differenced makers. Particularly in Best Ball where the weekly scoring (largely in the playoffs) is SO important, we have the MOST volatile position with a VERY small number of elite options. It’s not like the WR position where if you roll out a Robust RB start to your draft you’re fading an absurd amount of elite upside players at a position. It’s not even like QB where you’re fading a relatively small number of elite options, but the scoring is more replaceable & predictable.

If you play DFS, you know that in any given week, if you want to spend down at the TE position, you are really only fading big games from a couple of players at the top tier of pricing. And thus, it can be very advantageous to spend as little money as possible at the TE position, get a decent score from a cheaper player, and load up at all the other positions to outscore your opponents.

On top of that in DFS, you can easily get ownership leverage on the field if you so choose. Maybe the field is paying up for Kelce or Andrews that week at a high rate, or maybe they’re paying down for Dan Arnold with all of the Jags WRs hurt. You can easily get leverage by playing a different cheap TE (and maybe he correlates with your QB).

But in Best Ball, we never seem to consider this leverage point, even though the TE landscape AND the format of the game tell us that it’s one of the best leverage points we have.

Alright, so we understand the Tight End landscape. The elite guys are, of course, an edge from an upside and general projection perspective, but the market has priced that in. Then, we have a huge grouping of tight ends after the elite tier that all get drafted in 100% of drafts, and they have somewhat varying profiles. But history tells us that at best almost all of these players are going to be reasonable hits, while more likely they’re just going to be another mid to late round TE that was unimpressive or average.

And every single one of them is drafted in every draft.

So, we know that there are only a few elite tight ends that can separate, and they’re very expensive. This year in particular, they also have some serious warts.

Which takes us to the three main points in support of the Undrafted Tight ends:

We’ve spent a lot of time talking about the first two bullet points, so we should get down to, ya know, the actual players that comprise this strategic idea.

I’m not saying it’s wrong, but this year we have a much higher number of players with some combination of real role, real talent, and real draft capital that go undrafted in nearly every single Best Ball draft (especially in 18 rounds on Underdog). I don’t have a strong idea of specifically why some of these guys go undrafted, other than the fact that it’s a bit of a numbers game. You only have so many TEs that teams need in a 12 team draft, and as we discussed above, they largely get sorted by comfort level within ADP. So you get to this group of guys that either had down years last year, are rookies with fairly uncertain roles, or maybe in less than ideal offenses that just don’t get drafted. But in reality, they all have their own perks just like many of the other later round guys.

Are they slightly lower probability bets or slightly lower projections than the other guys who go in rounds 14-18? Yes, they are. But many have similar, or often even higher, ceilings than a LOT of tight ends drafted in every draft. You combine the lower and more volatile nature of the TE scoring with the fact that you now have players drafted in, let’s say, 10-20% of drafts, as opposed to 100%. You’re giving up a bit of certainty and a bit of projection for a 5-10x discount in ownership across the tournament.

Ok, buddy, just get to the strategy already.

Many Best Ball drafters are already employing Late Round TE strategies or just 3 TE strategies. You’ll often hear people say things like “If I don’t get a TE before TJ Hockenson, I’ll draft 3.” Or people will employ a late round TE strategy that takes some combination of 3 guys in, let’s say, rounds 13-18.

There’s absolutely nothing wrong with that, but it’s an incredibly common theme across thousands of teams. And given what we have outlined above about the TE position and the ownership leverage on these undrafted TEs, we can combine the two ideas.

So, on Underdog, we’d be drafting 3 TEs to close out our team in rounds 16, 17, and 18. Yes, the round 16 and 17 players would be a “reach” by ADP, but that’s actually the point. The TEs that go in that ADP range are, as we discussed above, almost no different than these players below that go undrafted. But ADP often blinds drafters, so it’s something we can use to our advantage in particular instances like this.

Clearly, you’ll have to plan ahead a bit for this strategy. You’ll want to get your other positions out of the way before those final 3 rounds, but that’s a pretty easy tactic to put into play.

The Undrafted Tight Ends for 2022 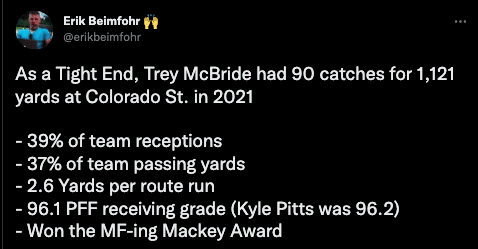 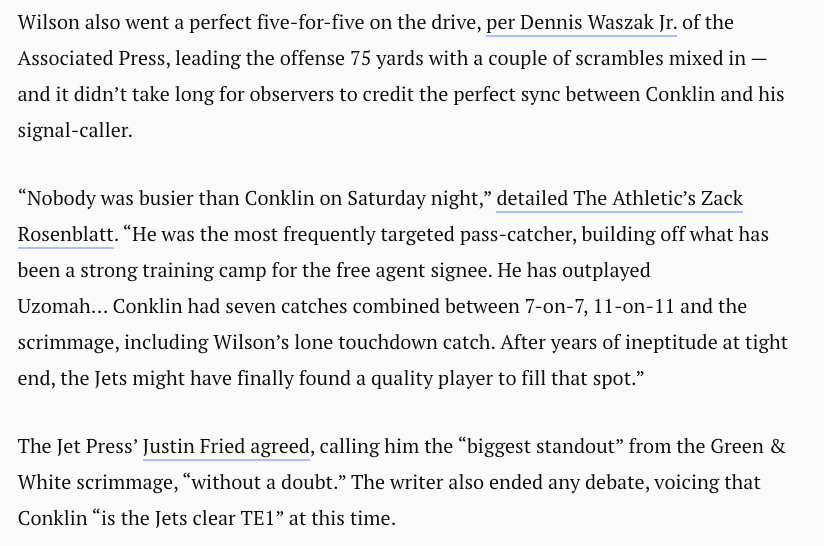 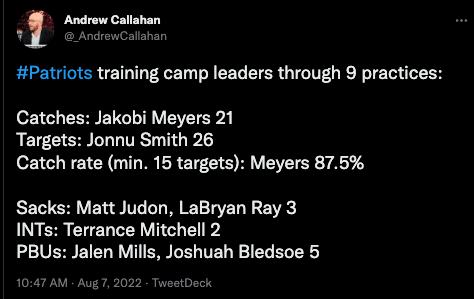 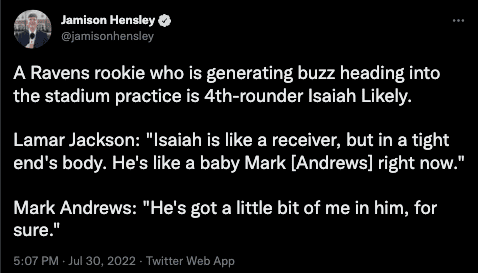