Underdog just released a new tournament, Rookies and Sophomores 2. This super uniquely formatted contest is an 8,400-entry tournament with a $10 entry fee and a top prize of $15,000. Like most other tournaments, you can max enter with 150 entries. However, this tournament sets itself apart in a variety of ways, all driven by the premise of “Rookies And Sophomores”, meaning the only players available to be drafted are Rookies and 2nd Year players in the NFL.

That creates a few unique elements: 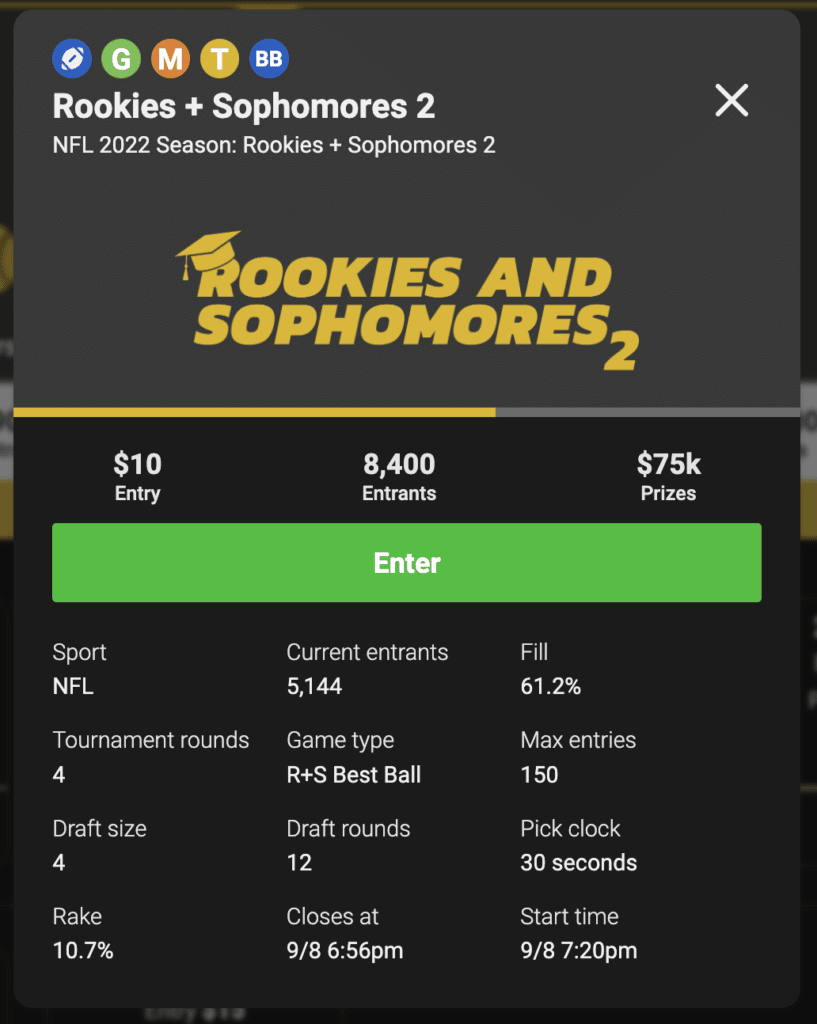 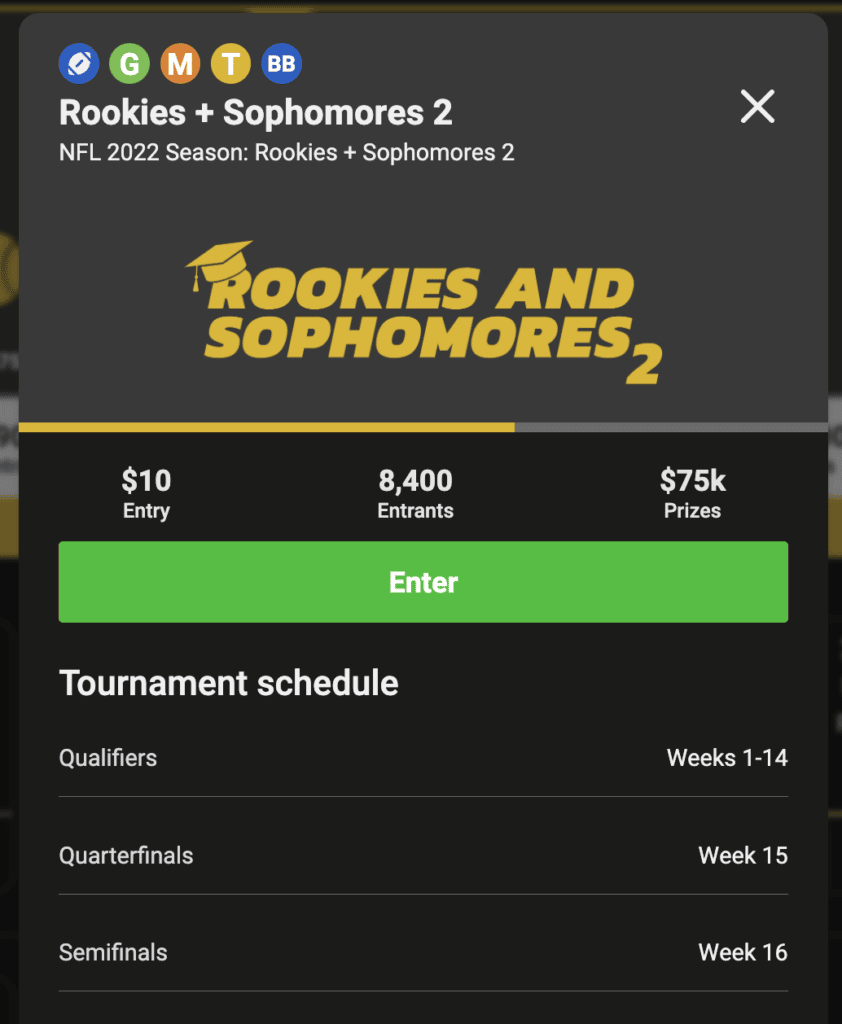 As noted above, drafts are reduced to 4 players rather than the normal 12. This is due to that decreased player pool – which limits eligible players to be in the 1st or 2nd year in the NFL. Due to that change, Underdog decided to combine WRs and TEs into one position (W/T) to increase the overall pass catchers available in the contest.

With all of these factors at play, how can we capitalize on increasing our first-place equity?

Due to the reduced player pool, there are 6 QBs that we know are guaranteed starters (barring injury) going into the season (Justin Fields, Trevor Lawrence, Zach Wilson, Mac Jones, Trey Lance and Davis Mills) with an additional rookie most likely to be a starter (Kenny Pickett). With only 4 people in your draft room, you will find a thirst to acquire guaranteed starters. This can be two-fold from a strategy perspective:

An interesting way to differentiate yourself is to take 1 QB in this contest. It may sacrifice some potential to advance from your 4 man group, but that’s a bit less of a concern in just a 4 team group, and it can allow you to diversify the other 11 players on your roster to increase your ceiling outcome. People will overlook this strategy because of how uncomfortable it causes you to be at the position, but QBs typically score on a more consistent basis and leaving the 10-15 points due to a bye week won’t hurt significantly due to the scarcity at the position.

You must also consider the possibility of being “locked out” at QB (due to other drafters going heavy early before you are able to draft your QBs) and take some upside dart throws in some of your drafts.

Players that fit into this mold the most are the additional rookie QBs (Ridder, Willis, Corral, Howell). All of these rookies have mediocre to average QBs in front of them which could give them a run at a starting job earlier than expected. This would be a major leg up on the competition as they will not be as heavily owned in the tournament overall. An outside-the-box pick in this vein would be Bailey Zappe. Zappe is the 4th round pick and expected backup to Mac Jones that threw for nearly 6,000 yards and could replicate Mac Jones-level production if something were to happen to Mac.

Another way to help increase your first-place equity and ceiling outcome is to stack. With a much more limited player pool, it is significantly more difficult to create correlations with stacking like we do in typical Best Ball tournament drafts.

However, that is what can make the benefit in Rookies and Sophomores even greater. You can simply benefit from betting on individual teams by grabbing players from the same team on your roster, and if the young quarterback takes a leap to turn the offense into a high performing one, you get extremely outsized gains in this specific contest with such a limited player pool.

With stacking being more difficult, it also makes it even more powerful in those ever important playoff weeks, especially Week 17. The final round is just 42 teams, but stacking can still be extremely beneficial with that contest size because the player pool is so small. The overlap on players that are on teams that make the final should be quite high, and we stand to benefit from using every possible strategic element at our disposal with that overlap.

Stacking also allows us to get far less things right both over the course of the entire season, as well as in the final round. With such a limited amount of viable QBs, if you draft the individual QBs that out perform the field, you are clearly getting an edge at QB against your opponents, but by also rostering the pass catchers that are benefitting from their strong performance, you can enable yourself to get two different roster spots correct with just one thing shaking out your way.

In regard to the 12 draft rounds, something that can help with drafting is setting and/or drafting with positional limits in mind. We know that both the WR and TE positions score fantasy points in a fairly high variance manner on a week to week basis, so it’s likely unwise to take less than 6 in a draft in this format.

In turn, this limits your RB position to no more than 5 (probably reserved for 1 QB teams) and no less than 3 (most likely in 3 QB builds when you miss out on the early, top QBs).

Even in those teams where you are unable to secure any of the top QBs, it’s likely best to stick with just 3 total QBs in order to not cap your upside and ceiling potential at the RB, WR and TE positions.