We all have mostly turned the page from last season and moved on to 2022 and Best Ball Mania 3 on Underdog Fantasy. But with this year’s draft season already commencing, I wanted to investigate how likely it was to come into the absolute nut outcome.

Why do we care about this? A couple reasons:

With that, we are looking at reverse engineering “the perfect draft” based on last year’s results. I will be using the ADP data from September 9th on Underdog. This will not include a focus on regular season results and data, so we are going to assume that this team managed to hit the 1729 point average threshold in the regular season (weeks 1-14). As you’ll see below, based on the player’s that fit this “perfect” team, that seems like a very strong assumption.

This threshold and the advancement thresholds can be found here: 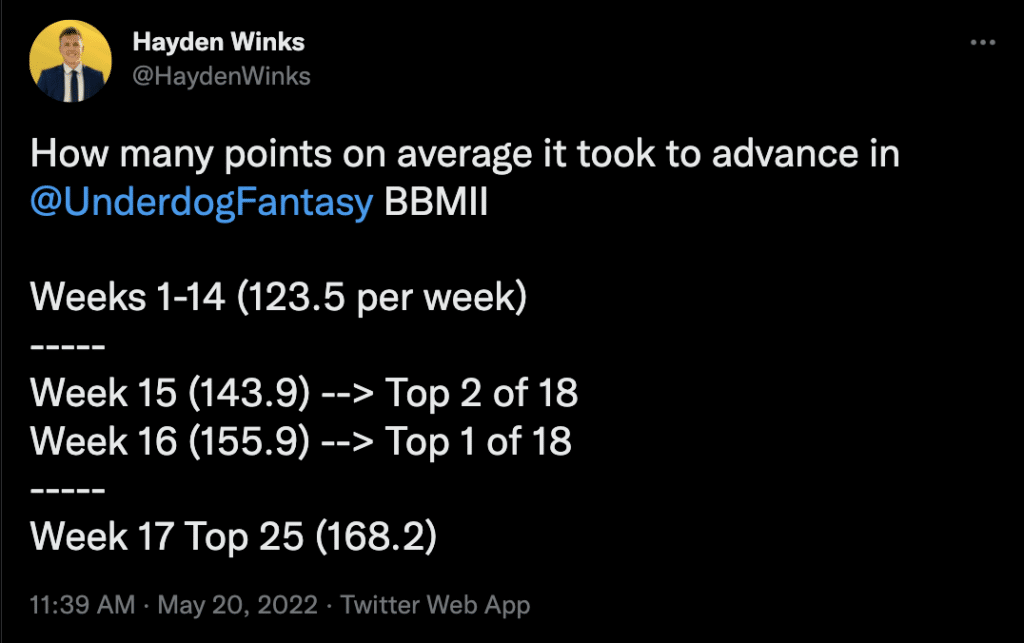 I don’t think there is much to say after these first three picks, but it’s interesting how they and each of the first several rounds lined up perfectly from an ADP perspective. You got the RB1(Taylor) & WR1 (Kupp), plus the WR2 (Adams). This team likely would have have started from closer to the back end of the 1st round.

This one was interesting. Since we are focusing here on the playoff weeks for our playoff formats like Underdog and DraftKings, it gave us a couple potential options. Would you take the QB1 (Allen) who performed average (for him) in the playoffs, or would you need the 37-point spike week from the WR (Tee Higgins) in week 16? Turns out Allen’s 9 point increase/addition week 15 was most important, so while Higgins’ Week 16 explosion certainly didn’t hurt you, you were not drawing dead without him and the raw points at QB ended up slightly more beneficial. Part of that is also because of this other Bengal…

Looking back, I just assumed it was possible you might not need Chase since Andrews was an animal in weeks 15 & 16 at a weak tight end position. However, there really isn’t a way around a player that scored 50 (!) points in half point PPR and nearly 60 on DraftKings. The interesting part with that, however, is that leaves off Mark Andrews from the “perfect team” in playoff formats last year despite the fact that he was seemingly a total home run pick as the TE1.

Damien Harris was a bit more helpful in the regular season for this team, finishing as the RB13 overall, but the monstrous 28.3 half point PPR game in week 16 helped you reach the finals despite missing week 15. He also fits a strong roster construction for tournaments in the Hero RB strategy.

With the huge Cooper Kupp season, the Ja’Marr Chase explosion in the Best Ball Championship week and huge seasons from Mark Andrews and Jonathan Taylor, Deebo’s season seemingly flies a bit under the radar. The 7th round pick finished the year just narrowly behind Davante Adams as the WR3. He also scored 17, 24 and 16 fantasy points in the 3 playoff weeks, which certainly didn’t hurt either.

Dillon is an interesting piece, as many may not have thought of him as even in consideration from the perfect team. But from Week 4 on, Dillon actually provided 8 games of double digit half point PPR points, which culminated in his 21.3 point performance in week 17 to help push teams over the top.

Jalen Hurts was in contention here, but Sony’s performance down the stretch was absolutely critical for Best Ball teams in 2021. With Darrell Henderson hurt (and of course Cam Akers out until his return in the NFL playoffs), Sony averaged nearly 16 points per game from week 13 on with an important 20 in the semifinals. This is also an interesting bullet on the concept of extreme ADP risers after injuries. When Cam Akers was hurt during the offseason and Sony Michel ended up traded to the Rams, his ADP skyrocketed to the 9th round. But because of a few variables in this team construction and his strong performance down the stretch, he ended up being a part of the perfect team even with the elevated ADP.

Russell Gage had somewhat of a breakout year with the Falcons and their depleted skill group. Particularly down the stretch, he had a string of strong games culminating in a 19 point effort in Week 15 to help propel teams to the next round.

This one is a bit of a surprise, similar to Mark Andrews. You’d likely expect Devin Singletary and his late-season breakout to be an absolute must, but that’s actually no so given the way ADP shakes out. Joe Burrow scored the most raw points during the playoffs (85.72 cumulative), and was the QB1 in the ever important Week 17. Pairing him with Josh Allen actually allowed you to score the most raw points given the other running backs that fit into the build in other rounds in lieu of Singletary.

Gronk was absolutely dominant when healthy, which clearly was important for this team given that it did not include Mark Andrews in the early rounds. He missed weeks 4-10 to injury, but still managed to have 6 double digit scoring efforts in half PPR and even outscored Andrews in the championship week 17 game with his 15 point performance.

Amon-Ra has almost become the poster boy for these playoff format Best Ball tournaments, so naturally he slots in here in the 13th round. He finished as just the WR27 overall for the entire season, but he was absolutely insane down the stretch, closing the year with 4 20 point games in his final 5, culminating in a 31 point game in the championship game.

The 14th round was actually so bad that AJ Green or Rashod Bateman nearly made the squad without either providing much of anything to the squad. However, since the team has no TE before Rob Gronkowski in round 12, Evan Engram actually become extremely important even in a down year. He was at least active and accumulating points during Gronk’s injured phase, and his 9.7 points in week 16 were actually important to your overall lineup as the TE7 for the week and “helped” you to the finals.

Christian Kirk surpassed his ADP by being the WR26 on the year and provided some spike weeks along the way. He was decent in the playoffs but was particularly pivotal in week 15 scoring 19.9 points. An argument could be made for Zach Ertz here as well given the lack of tight end production on the roster for a stretch of the regular season.

This is such a great example of how differently we should maybe view late round picks in these formats sometimes. Pringle did not have a big season, and he didn’t even spike in the championship round. But he did pop up with a huge WR6 overall performance in the semifinal week 16 round to make the starting lineup. Interestingly enough, while he didn’t help in the championship, he would have been a selection as part of a week 17 game stack with Joe Burrow/Ja’Marr Chase.

The other “tournament winner” from the late rounds last year is clearly Penny. Despite doing nothing for most of the regular season, he was the RB1 overall for those 3 playoff weeks, had a 26 point game to close out the regular season (week 14) and led you to a boatload of money with 30 fantasy points in the championship round. Another interesting correlation angle here is that he correlates with Amon-Ra St. Brown in their week 17 matchup (Seahawks – Lions).

Everyone remembers Penny, St. Brown, and Chase from the championship week, but Darrel “the Mentor” Williams also slots into the perfect team. His regular season flies under the radar with 5 double digit games and 2 games of more than 22 fantasy points, but he also sneakily makes the optimal championship week lineup with 24.2 half PPR points.

All in all, the “perfect team” from 2021 is certainly not something we should base all our decisions off in 2022. However, it is an insightful way to look back on how you could have crafted an absolutely dominant team that led you to 7 figures of winnings. This is a team any of us could have drafted over the course of draft season, and it even includes some of our most talked about strategic elements here at Spike Week like stacking, week 17 stacks, maximizing playoff upside and secondary correlations in the championship round.