NBA Playoff Best Ball is one of the most fun formats of fantasy sports. It may not be the most well known, but from both an entertainment and strategy perspective, it rivals any format we can play (in my humble opinion).

Before we dive into some more complex strategy discussion, let’s go over some of the basics first. 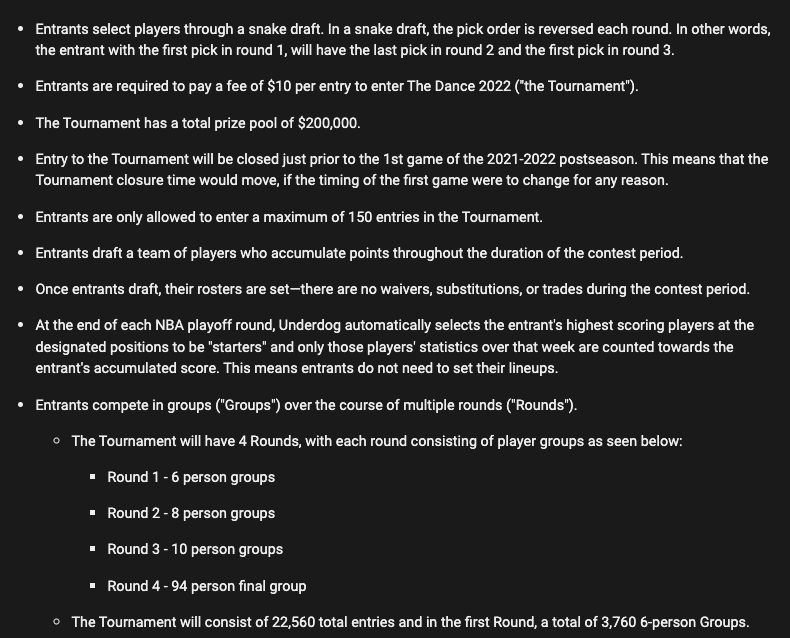 In NBA Playoff Best Ball, you will draft a team of NBA players with no further roster moves. Your roster is set as soon as the draft is complete. Your drafted players will then accumulate points over the course of the NBA playoffs. If that player’s team is eliminated, that player obviously will no longer score fantasy points for your team.

Each drafted team competes in groups over 4 rounds of the contest:

Round 2 – 8 person groups (other advancing teams from Round 1)

Round 3 – 10 person groups (other advancing teams from Round 2) 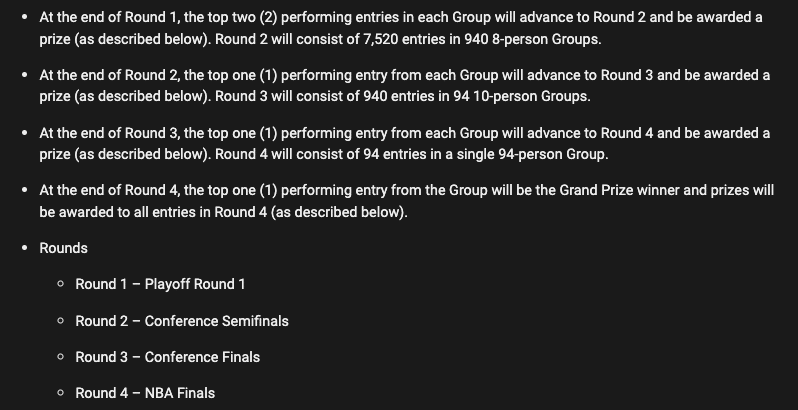 The rounds of the contest coincide with the actual rounds of the NBA Playoffs with the 4th and Final Round of the Best Ball tournament being the NBA Finals.

The scoring for the players is also pretty simple. If you have played NBA Daily Fantasy Sports on Fanduel before you probably notice that it’s the same scoring format they use. There are no 3 points, double double or triple double bonuses. The most overlooked factor of the scoring is the fact that steals and blocks are both worth 3 points.

Each team will draft a 10 player roster. Of those 10 drafted players, 5 of them will count towards your team’s score in each round of the contest. Those 5 scores have a few positional constructs that they must fit into:

(positional classifications are determined for each player by Underdog Fantasy)

So, it’s important to consider these positional allocations during your draft to make sure that you are not only covering each position with your initial 10 man draft but that you are also covering those positions for Rounds 2-4 of the contest as well.

We’ve got the format and scoring down, so now it’s time to talk some draft strategy. There are a few different critical aspects of this NBA Playoff Best Ball format that are extremely important, but also unique to this specific fantasy sports game.

I’m sure one of the first things you thought about when diving into this NBA Playoff format is the obvious fact that you are going to have to get to the finals with the appropriate amount of players from the two teams that make the NBA Finals in order to bring home the top prize. Not only do you need to be able to field at least 5 players from the NBA Finals matchup, but you need to be able to fill all of the positions (as shown above), and you are going to have to have players that are scoring enough fantasy points in the finals to outscore 93 other finalists.

On top of that, you have to somehow navigate through 3 rounds of the tournament simply to advance to that final round. That is particularly difficult given the NBA Playoffs are 7 games series, as opposed to the NFL where it is just one game. If one team goes to 7 games in their series while another team sweeps their opponent (and thus only playing 4 games), that’s assuredly going to be a huge discrepancy in the amount of fantasy points they score.

So, we need to thread this needle ever so perfectly that allows us to continue to advance in the early rounds while giving us a chance to take down 1st place when we get to the NBA Finals. How do we do that? Correlation.

Correlation, or stacking players from individual NBA teams, can seem like a risky strategy when it comes to advancing teams through the tournament, but it’s actually the optimal route to allow us to both advance AND maximize our upside for the final round.

That’s because players on the same team are not only correlated in terms of their team advancing, but they are also perfectly correlated in the amount of games they play in each round. Like every fantasy format, there are going to be times when it doesn’t work out on any one particular team we draft, but if we use correlation to our advantage for the NBA Playoffs, we can give ourselves the best chance at landing on a juggernaut team, especially if we’re drafting multiple teams.

Let’s take a super quick step back and talk stacking basics. For this format, we want to be targeting multiple stacks within our teams while being mindful of the conference the teams play in. Ideally, we will have multiple stacks (2-4 players from one team) that are put together in a way that we have some scenario or multiple scenarios of an NBA Finals matchup that give us a chance at first place. You need to at least be able to fill out that 5 man starting lineup in the NBA Finals.

And that correlation between games played is so important for two reasons. Of course there is risk if you get unlucky with the amount of games played by your stacks, but if you happen to land on multiple stacks that play more games than the other NBA teams, you are going to cruise to an advancement. And secondly, correlating all of your players, including your “secondary” players, gives you the chance to get bailed out if your main players happen to play less games in any given round.

By secondary players, I mean if you target the Bucks are your “main stack” in a draft, and then you select, let’s say, Jaren Jackson Jr. in the middle rounds. Instead of opting for the “best player available” a couple rounds later, you should select a Desmond Bane, Dillon Brooks or Steven Adams, so that you correlate with your selection of a Grizzlies player earlier.

You can get “bailed out” in a scenario where the Bucks sweep their opponent, but you have correlated your other 6-7 players on your team. If those players then play a full series of games, they can put up enough fantasy points to help you advance and not waste a team with a stack of one of the title favorites. Last year (2021) for example, the Suns made the NBA Finals, but they swept the Nuggets in the 2nd round. You obviously needed multiple Suns on your team, including some of their best players, but you needed to still advance through that round despite them playing 2-3 less games than EVERY other team left. You would have been able to do so by correlating later round picks from the Hawks (as one example), who went to 7 games with the 76ers in Round 2 and were very cheap in drafts. The Hawks obviously did not make the Finals, but they were a critical part of teams that had the Bucks/Suns combo because they provided the later round boost that helped you get through that Suns sweep.

One thing you will find out very quick when drafting these NBA Playoff Best Ball teams is that most of the drafts go EXTREMELY similarly. Players all go at basically the same draft position in every draft, which leads to a TON of overlap in player combinations, and maybe most importantly, in stacks.

For instance, in these 2022 drafts, Giannis Antetokounmpo is the 1st overall selection in basically every draft (as he should be). The ADP works out in such a way that Jrue Holiday and Khris Middleton are almost always available when that drafter comes back around. Almost everyone sees the potential to stack the Bucks and double taps Jrue and Middleton there, and it makes sense at first glance. However, it’s one example of a team that is going to be so heavily duplicated that it’s probably not ideal in a tournament like this. There are going to be SO many teams that start with those 3 players.

Thinking through different ways to create different player combinations might even be more important than the above correlation and stacking because there are only so many possible pairings of the teams that end up making it to the finals. Not only can it be beneficial to create unique pairings of team stacks, but it can be extremely beneficial to create unique combinations of individual players on teams. Because of the variance with games played in each series, having unique combinations is even more advantageous in this format. You don’t even have to necessarily be on the right side of variance for how well a player plays, but you just need them to play more games in a given round. Just through that, it’s possible you could be one of the very few teams to advance a Giannis (or Embiid or Jokic, etc.) team while so much of the field gets knocked out only because they drafted off ADP and the games played did not work out in their favor.

The last thing on uniqueness would be players in the last round. This is only a small edge, but being willing to to take players that are not drafted in every single draft, either as a secondary stack or to add to your main stack, is another very easy way to give you a smooth path to first place. it is incredibly unlikely you will end up using the score of your last round pick in the first few rounds, so if you draft a Bucks or Warriors stack, you can look to guys who might give you a unique player in the finals like Pat Connaughton or Kevon Looney.

Good luck in your drafts!